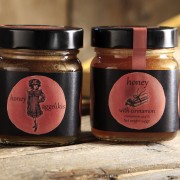 This specific product is a combination of 3 types of honey, kumara, thyme and flower honey, in specific proportions again, with Ceylon cinnamon powder.

Ceylon Cinnamon has one advantage over all other types of Cinnamon. It has ultra low coumarin levels. Coumarin in high doses causes liver failure, so for people who take Cinnamon on a daily basis, Ceylon Cinnamon is the preferred choice.

For fine desserts, Aggelikis Honey with Ceylon Cinnamon, is an absolute must because it is subtle, smells very mild and is slightly sweeter in taste.

In this specific product, the adding of the specific type of cinnamon, along with the guaranteed quality of our honey, gives the aroma of a very sophisticated and fragrant smell.

It is usually served with tea, porridge, French toast, in cooking and in salad dressings.

There are no reviews yet.

Only logged in customers who have purchased this product may leave a review.